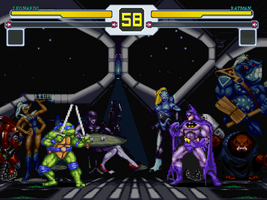 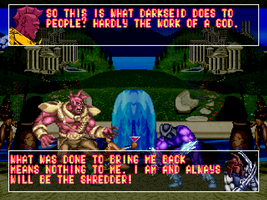 Advertisement
Teenage Mutant Ninja Turtles vs Justice League is a fighting fangame developed with the MUGEN game engine. This time, you can compete in one-on-one battles featuring characters from these two unique universes.

This game has twenty-two characters taken from both the worlds of DC Comics and Teenage Mutant Ninja Turtles. As well as the four famous turtles, this game also has other well-known characters from their universe such as April O'neil and Shredder. On the other hand, there are also popular characters from the DC universe, such as Batman, Superman, Wonder Woman, and even some villains like DarkSeid and Despero.

Although this game has some original sprites and soundtracks, most of its content is taken from two popular 16-bit games: TNMT Tournament Fighters and Justice League Task Force. Although those games come from two different studios (Konami and Acclaim) the color palette has been mortified and integrated with the scenes to perfectly combine the two universes.

As well as a classic arcade game mode, Teenage Mutant Ninja Turtles vs Justice League also has a local multiplayer mode, a training mode, and a special game mode in which you play as a random character.

Why is this app published on Uptodown?
(More information)

Similar to TMNT vs Justice League

Plants Vs Zombies
Defend your home of the Zombie attack
Zuma Deluxe
Don't let the balls arrive to the center!
They Came From Verminest
Battle the giant insects of Verminest
City Racing
Race in illegal racings in big cities with corrupted cops
Angry Birds
The most famous iPhone game arrives in Windows
Subway Surfers (GameLoop)
Play this thrilling endless runner on PC too
UP
Go on an exotic adventure with Carl, Russell and company
Final Fight Gold
The king of street fighters just got better